Process
The idea popped up on the first day of the new year; January 1, 2016. I was looking around my Facebook Page and Instagram, and I realized I haven’t made a rendered digital painting for awhile now. I have a list of projects on my notebook and I thought maybe this would get the ball rolling for me for the new year. Kind of like a stretch sketch just to warm up.

So I started thinking what I could do. On my notebook I have tons of design ideas, but as I was looking at my accounts, I thought maybe I could do one similar to Not What It Seems. The idea was to create a painting that was normal on the surface (which would appear as my cropped cover photo on my Facebook page), but when clicked it would reveal a surprise underneath.

Thought Process
I started sketching. A few doodles later I started drawing caves, and I kind of liked the idea of a secret cave where a pirate could hold secret meetings or stash their rum, treasures, and just about anything they could think of! But how to make it a bit more interesting? Maybe it wasn’t just one cave, maybe they were rooms specifically to hide certain things, and all over these rooms there were some sort of security or danger to make sure no one else can discover it.

What I think about whenever I get into a digital painting like this is that I want to tell a story in detail. And with this story I wanted to show that this place has been kept secret for awhile now, and that whoever made this wants to keep it a secret but welcomes a few alliances inside. So maybe there were multiple secret entrances, and there was a way for you to get in without endangering yourself.

Research and Drafting
I probably don’t mention this too often, but doing your research to create a design really helps. This helped me a lot, I started researching about Pirates and their culture, I read about their history, how it all started and how some were better than others.I looked back at movies and video games that used these information, and I bet you know which movies and games I’m talking about.

I learned that they used air-pocket caves for such things, and sometimes you’d have to swim so deep just to find its entrance so they would drop barrels underneath that you could swim into for that extra air. I learned that sometimes these entrances were even difficult for themselves to enter, uncontrollable forces like sharks and other sea creatures would make it too difficult to go back to. So after I listed all this down, I started drafting.

I added a secret entrance from the island itself (an outhouse, just wanted to add a little humor in there), another entrance underwater with a long staircase that seems to be flooded, I added a shipwreck on the right, a cave specifically to hide all their gold, a library, and a sunken ship.

Whenever I’m drafting, I always make sure to add all the details, even the silliest ones like a sunken ship in the deepest cave. It’s like taking notes, and later on as I render it I would see if it’ll still fit to the design or not. It’s kind of like this quote from the movie Finding Forrester.

Rendering
First I started outlining the different parts, just to be able to separate them and color them one by one. After I separated the water, island, caves, and surface details, I started coloring the island in. I didn’t want it to be just one layer, I wanted it to have movement. So just like what I did with the tree for my other digital painting (The Fort) I started drawing where I want the movement to lead the eyes.

I wanted it to curve towards the tips of the cave, and from the top it would reach down. I colored it in this way keeping in mind that the light should be above all the strongest curves and the shadows would make these curves a bit rounder. Using the shadows I could create this look where one curve is bigger and thicker than the other.

Later on I filled up the entire water layer with different shades of blue and green (later on, the green would be more distinct, as I realized that I wanted it to pop out more against the brown of the island and the caves).

The inner parts of the caves were a bit tricky, I wanted to show movement as well, but subtle, and I wanted it to look like they were domed out to fit everything in. This worked better when I started coloring in the details.

Later on I started to render the ladder, the long ladder down to get to each cave. And like I said, it starts off by entering the outhouse on the surface, an unlikely place to check for a secret entrance. I started placing tiny posts as well, warning signs placed around some of the entrances in the cave.

I kept the idea of a sunken ship in the bottom cave, but it felt a little off for me considering there was already a ship on the surface that was placed like an entire structure in itself. So I sat there for a minute, I was thinking about what I said on how whoever made this island or rather transformed this island to this welcomes certain alliances. I was thinking the sunken ship could be like their club house, a place where they can just hang out or have secret meetings. And then it hit me that maybe it shouldn’t be a literal sunken ship, maybe it could be a pub half below the waters that appeared to be sinking. I liked the idea! So I started drafting it and named the pub “The Sunken Ship” which you can see on the wooden plank in its entrance.

The Island
The Island was going to be what the viewer would see first on my Facebook Page. So I wanted it to look detailed but a bit more calm and soft compared to the surprise underneath. I almost wanted it to look peaceful and innocent in a way, the perfect combo when hiding something I guess.

I placed a little rowboat tied to the dock with a very old rope ladder hanging on its ledge. I placed a Pirate Ship with slightly torn out sails on the sand with a plank resting on the island, something that looks a bit welcoming. I was telling myself that on the surface, it would seem like it really was a place pirates could meet, and I wanted it to look welcoming as possible so I placed a lighthouse right in the center. Behind the lighthouse is a structure of some sort, maybe a hall? It was a place pirates could stay and just unwind maybe. And for fun, I added this floating marker on the right, it started out with a seagull resting on its tip but I changed it into a pelican. Then in the center, you’d see the outhouse, nothing out of the ordinary, but it seems to be touching the water. 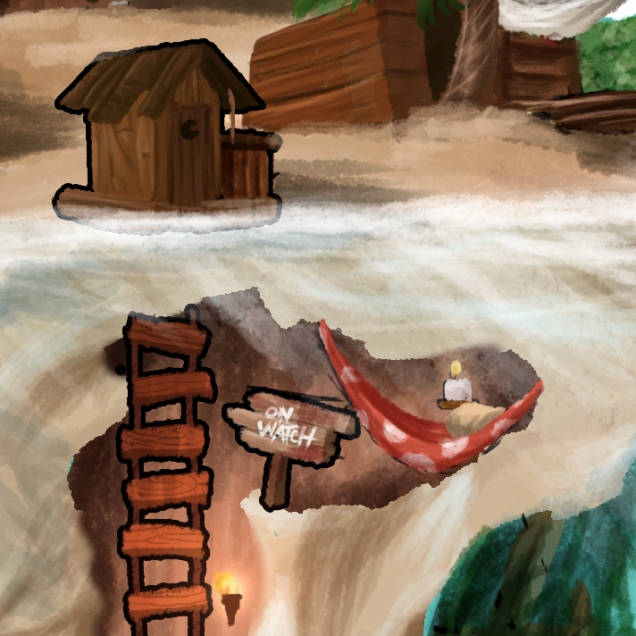 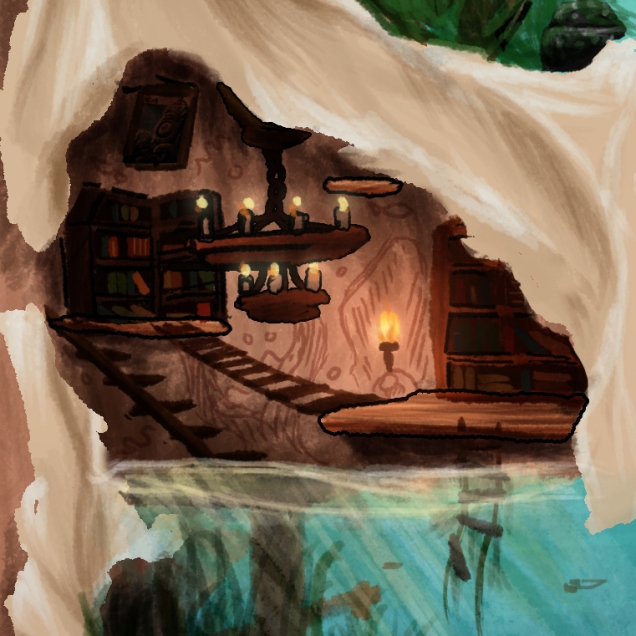 Little Details
I like adding little Easter eggs to my illustrations, it makes the entire piece look more interesting, and I want the viewer to be able to look at it over and over again and maybe find something new each time. These are my favorite ones.

Security:
On the very entrance of the outhouse ladder, I placed a hammock on a small inner cave. On the sign it says “On Watch,” because I wanted to give the viewer this idea that there is hired security in this place. And that if you enter the outhouse entrance by accident, someone will be there to catch you. Little details like the candle tells a story as well, I wanted to show that this security was ALWAYS on watch, day in and day out.

Not What It Seems:
In the library, I wanted it to show that these pirates have time to read and they weren’t just collecting treasures, they were collecting books too and they were a sophisticated bunch. The chandelier was placed there to say it, but I wanted to add something else. So I started recalling all the fancy libraries I’ve seen, some in movies, and I always pictures a huge painting on the wall. I liked that, and although it’s not that noticeable, I placed a painting above the higher floor of the library, right above the book shelves. And what was the painting? It was my other illustration that started this trend of hidden secrets for my cover photo, it was Not What It Seems.

Gold Cave and Wall Art:
For the gold cave, I wanted it to show that it came from different places. I had this idea of placing familiar things like a tomb from Egypt or something like that but I wanted it to be a bit more subtle. I decided to create this map painting on the walls of the cave, a treasure map with x marks the spot and all that. It’s simple, but it did add to the overall design.

Final Thoughts
After rendering everything and adding in the final details like the smaller fishes, seaweeds, and shadows here and there, I lit it up and signed. I told myself that this year I want all my works to tell a story just like this one, and I want to keep creating and learning in the process, and explore different styles and techniques.

I’m planning to make more rendered illustrations this year. And so far, this year has been amazing. Lots of projects coming up and lots of ideas for Paper Pirate. I could say that so far for the first month of 2016 I’m just scratching the surface, and the deeper we go the more we find. So cheers to this year, and let’s keep making art! Thank you for reading and I hope you liked it!